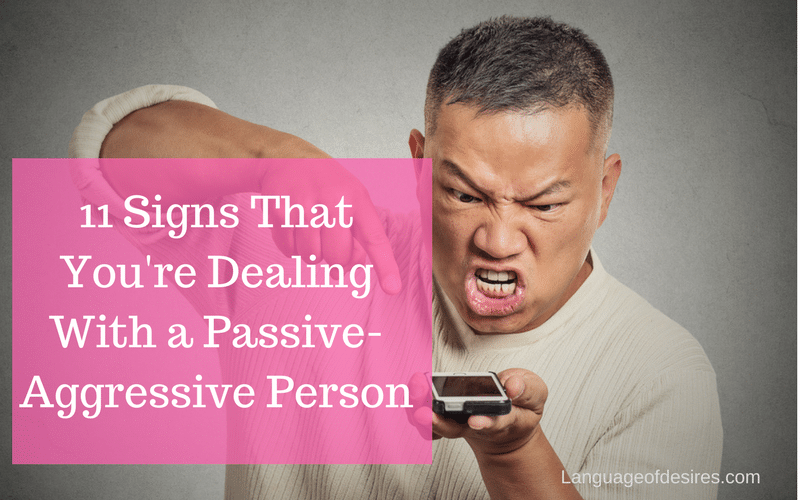 It will be helpful to your relationships to know if you’re dealing with a passive aggressive person. Here are 11 signs that you are with such a person:

1. Saying Yes When You Mean No

A very common passive aggressive tactic, especially in relationships, is saying “yes” when you actually mean “no”. If your partner consistently tells you “yes” when it comes to doing things, but actually never really follows through, this is a sign of passive aggressiveness. He or she says “yes” because they don’t want to get into conflict with you, but they actually mean “no”.

Passive aggressive people tend to give the silent treatment when things do not go their way or they are upset about something. They withhold intimacy, and may even be sarcastic or simply unattached emotionally. They use the silent treatment as a weapon, in an attempt to punish and let you know that you’ve done something wrong or displeasing to them.

Have you ever asked your partner if he was all right and the answer was “I’m fine”! Yet, you know by the tone of the voice that he is not fine. Or maybe there is this lingering negative attitude that comes with a dissatisfactory tone of voice. These are signs of passive aggressive behavior. A person does not want to come right out and say what is bothering him or her. Rather, the anger and resentment comes out and snide remarks.

Let’s say that you and your partner have discussed the responsibility of certain chores around the house. Maybe his chores he uses delay tactics on quite often because he thinks that if he delays long enough that maybe you’ll do them and stop expecting so much of him. A passive aggressive person will procrastinate, use excuses, and use delay tactics in an attempt to remain in power.

A common characteristic in passive aggressive behavior is when someone continually says, “I can’t” when asked to do something. He or she may not want to take on a new responsibility, so they get into this helpless mode acting like they just can’t take on anything new or make excuses to get out of it.

A passive aggressive person will use sarcasm to try to keep the upper hand on you. Using sarcasm, oftentimes hidden behind humor, is an attempt to possibly hurt your feelings or get them out of doing something that they don’t want to do. If they are confronted about it, often times they state that they were just kidding.

Passive aggressive people like to push other people’s buttons. Chances are they know exactly what buttons to push. For example, a man may not clean up his mess in the bathroom because he knows that this will cause his wife to become upset. Or he may not call home to say that he is running late, as he knows his wife will freak out. By using tactics to push another person’s button, the passive aggressive person is essentially acting out some internal frustration, resentment, aggression or apathy.

A passive aggressive person will blame others for their own happiness. Instead of pointing the finger at themselves, they will consistently point their fingers at their partner, friends, boss, and society for their lack of achievements or unhappiness.

A passive aggressive person may play the victim or martyr in order to get his or her needs met. This is especially true if they’re with someone who is quite nurturing and giving. They may take advantage of that generosity, exaggerating their issues to try to get favor or sympathy. They essentially use the other person’s goodness to get what they want.

A passive aggressive person will fear being abandoned, but also fear deep closeness or intimacy. When they are feeling fearful of being alone, they will draw you in, but when they have you close, that will prompt fears of engulfment or confinement, and they’ll push you away. It can become very confusing for you.

Ever been with someone who sulks when they don’t get their own way? A passive aggressive person will oftentimes sulk in an attempt to get what they want. They withdraw and put on that gloomy face in the hopes that you will feel bad for them and give them whatever it is they are wanting.

Do you see some of these characteristics in people you hang out with? Do you recognize any in yourself? If you feel as if you are in a relationship or dealing with a passive aggressive person, there are some proactive strategies you can use in order to handle passive aggressive behaviors. You can learn effective boundary setting skills, communication skills, and conflict resolution skills that will help you in your relationships.

Dealing with a passive aggressive person may not always be easy, but it is possible to learn how to be proactive instead of reactive in dealing with their passive aggressive behaviors. There are some great books and resources out there as well that will help you learn the skills that you can use to have healthy and fulfilling relationships.

Don’t Miss : What To Do When You Can’t Sleep -15 Tips For Better Sleep